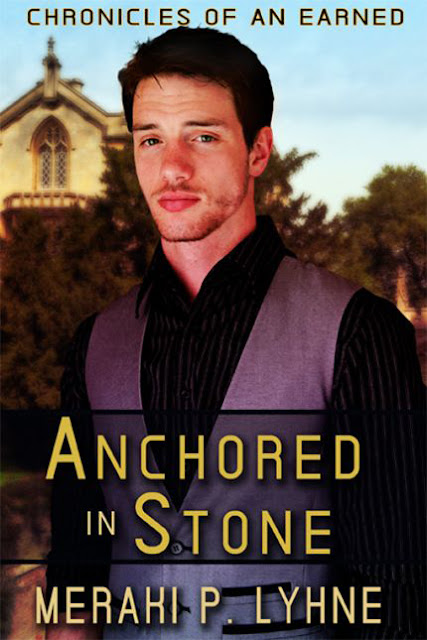 Book Name: Anchored In Stone
Series: Chronicles of an Earned
Book: One

The easiest heist in Alex Rhoden’s career is also the most dangerous of all. As a child, Alex Rhoden’s talent as a thief was recognized by a rich art collector. He has since then been schooled and trained to become one of the best art thieves in the world. While on the easiest heist of his career he finds himself running with the artefact in his possession, followed by an unknown adversary. But they are not the only ones interested in the artefact—so is an ancient race of demigods called Earned. Cornered and out of options, Alex has to make a difficult decision that will turn his life upside down no matter what he chooses.The young demigod, Kaleb, is reborn into servitude, but he is a freak amongst his own kind—the forbidden unity between an Earned and a witch. Other than finding himself, learning to control his powers, and balance high school as a senior, Kaleb must earn the trust of his pack and family. But Alex is in danger and the young demigod struggles to keep up.

Excerpt:
Alex made his way down the corridors, watching out for the guard. This one he found leafing through a magazine with his feet up and his back turned to the staircase. Alex stopped, breathed in deeply, and let it out slowly, reminding himself that a fat guard’s dumb luck was what caught his cat burglar mentor. No matter how carefully one builds a card house, a gust of wind can bring it all down.
So Alex took his time and focused all his expertise on getting past this guard as if he were from the agency itself. Finally in the basement, he made his way to the crate, pushed it open, and sought out the stone first. He found it and put it in a bag, which he in turn put in his thigh pocket, before stuffing another bag with whatever his pricey education had told him was worth the most on the black market.
Happy with his find, he turned, but something seemed to have a hold on the pocket with the stone in. He turned and found himself face to face with a big, mean-looking ghost. He gasped and clasped his left hand over his mouth to catch the scream he couldn’t stop, and clutched the stone with his right.
And then he ran. He didn’t even care if the guard saw him. He made it past the guard, who was nowhere in sight, and exited through the service entrance.
Alex didn’t stop until his body threatened to vomit out his heart. He stopped and by sheer exhaustion, his body chose to empty his stomach anyway. He took the stone out and stared at it. It felt almost as if fine electricity danced between it and where it touched his skin.
“What the hell did you have me steal, Mr. Henry?”

Today I’m very lucky to be interviewing Meraki P. Lyhne author of Anchored in Stone.
Hi Meraki, thank you for agreeing to this interview. Tell us a little about yourself, your background, and your current book.

Trivial stuff, sure. I’m a Danish woman at 36. I’m a mom, a wife, a coffeeholic. I’m a black smith by trade, but I switched out the hammer and anvil for a keyboard to make the constant run of a character stop. It didn’t work out as well as planned because that just made room for more. When I moved into MM I made up this Pseudonym. That’s what the P. stands for. I’ve been published in Denmark and a publisher there once told me that readers can relate two genres pr. Author name. MM is so far from what I’ve written so far, so I made up Meraki to write MM.

Where did your love of books/storytelling/reading/writing come from?
Imaginary people just kept talking in my head! My friends would amuse themselves by prompting me with a few details, and I’d sit there and come up with huge stories at the drop of a coin. In school I hated reading because I had to. I was far more comfortable in my own head, and when I lacked knowledge to make the stories work (I see plotting and story development as a puzzle to be solved for credibility) I would go to the text book aisles. I always loved text books. Still do. But the need to learn the craft of pacing and developing characters had me pick up fictional works, too. Now I don’t have to read anymore, and I’m not given books I don’t like, so I love reading now. I read daily—both fiction and text book stuff.


What were your goals when you started this book? Do you think you met them?
This book started out a challenge. A few Danish author friends and I were chatting and came upon how to evolve as an author. In the end it was to write the genre we least of all saw ourselves writing. I’d always found the paranormal to be a genre I might try out one time or another, but gay sex? The only thing I knew of the MM genre was that it was popular in fan fiction. I didn’t even know there was a market for it. I learned that 500 pages into the Chronicles of an Earned, and thought, I’d better split this up and pace the plot better. My goal was to feel at home in a new genre and try something new, so I think I reached and surpassed my goals by miles!


Have you ever co-written with someone before?
No, I’m too much of a control freak for that. LOL


Tell us about your favorite character in a book (yours or someone else’s).
It’s from a Danish book “Jack the Ripper’s Apprentice” by Carina Evytt. Jack the Ripper is reincarnated into a kitten. It follows home a stressed out surgeon, and bloody dark humor ensues. She’s brilliant, and so is the character of the surgeon.


List five foods you can’t live without.
Meat, vegetables, fruit, nuts, and seeds. My diet is pretty uniform, but I absolutely love it.

Posted by multitaskingmomma at 1:13 AM