Review: Anchored in Stone (Chronicles of an Earned #1) by Meraki P. Lyhne 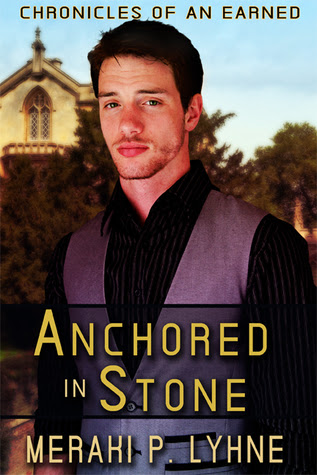 
The easiest heist in Alex Rhoden’s career is also the most dangerous of all.
As a child, Alex Rhoden’s talent as a thief was recognized by a rich art collector. He has since then been trained to become one of the best art thieves in the world. While on what should have been the easiest heist of his career, Alex finds himself running with the artifact in his possession, followed by an unknown adversary. But they are not the only ones interested in the artifact—so is an ancient race of demigods called Earned. Cornered and out of options, Alex has to make a difficult decision that will turn his life upside down no matter what he chooses.
The young demigod Kaleb is reborn into servitude, but he is a freak amongst his own kind—the forbidden unity between an Earned and a witch. Other than finding himself, learning to control his powers, and balance high school as a senior, Kaleb must earn the trust of his pack and family. But Alex is in danger, and the young demigod struggles to keep up.

Anchored in Stone is about a young demigod whose identity was discovered almost accidentally. His father, an Earned, never knew of his existence so was just as surprised as everyone else when Kaleb's soul was detected.

Alex is a thief with so much potential. He'd been better than good at a young ripe age of 11 or 12 and now that he's much older, and supposedly wiser, he's even better. So it was kind of surprising for Alex to realize that his current assignment is not as easy as it first seemed. Especially when the drop off place changed almost overnight.

What brings Alex and Kaleb together? Before you think romance, stop.

Let's go rewind before we continue.

Anchored is high fantasy full of demigods, the supernatural and humans who work with them in search of something which may or may not be dangerous. It is a story where the plot thickens as more and more characters come into play. In short, although this is categorized as M/M, it is not necessarily so. True, there are hot scenes dropped here and there through the read, but it's icing on the cake. The cake, is the real story here and that is what I focused on. Unfortunately, spilling the beans on this one would spoil too much of the story.

This is my first read by Meraki P. Lyhne so I was quite unprepared for the style I had in my hands. I am a fatasy/sci-fi nerd and have been unashamedly for decades. This series is one which I would liken to something like Feist would write, but with some (the operative word) gay characters.

If you are looking for something different to read, something beyond the mundane romance and shifter romances, I would honestly recommend this. I dropped half a rating because it took some time for the plot to develop but once it did, the story was fast paced and unbelievably visual. Thrilling too.

Note: eARC received from Pride Promotions for an honest review.

Posted by multitaskingmomma at 1:42 AM