Review: Stay With Me by Lily Adile Lamb 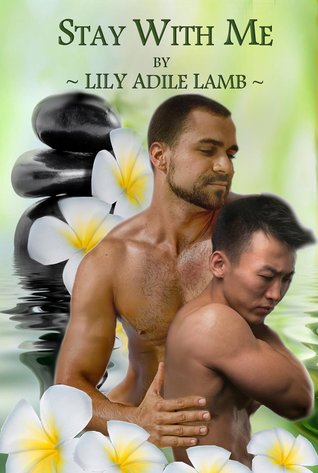 It has been weeks since Curtis first saw the young waiter with the haunted eyes. No matter how often he went to the café to find the right opportunity to introduce himself, that moment simply did not come that quickly.
Joseph was aware of the gentle giant who quietly came to have his lunch and then left day after day. Fearing his father’s wrath and under his ever watchful eyes, he made no moves nor overtures. Until one day when the other man approaches to him…
Hope can turn to love... interracial love.


Curtis never expected to find love in a cafe, much less the quiet waiter who hunched over and walked on egg shells most of the time. When he sees him for the first time, Curtis could neither forget nor choose to. There was just something endearing and sweet about the man. It doesn't take time for him to discover said man's name as Joseph, and he was the cafe's owner. After a while, they strike a conversation and Curtis is happily going about his life thinking, he may just have found the man of his dreams. Little does he know that Joseph is keeping a secret and it may just endanger his life.

Sounds a little melodramatic, don't you think? And yet, once you begin reading the book, read the thoughts that run through Joseph's mind, begin to see and experience what he goes through, then you wonder how Joseph was going to continue. The beauty of his character is, he strikes the courage and knew what to do. I agree, he did it through a whole lot of pain and indecision, but when it comes to his types of situation, I wondered how he did it had he not had that inner strength to persevere...and of course, he had Curtis to look forward to in his life. Thing is, will Curtis stay with him once he learns the truth?

Stay With Me is a sweet story, written in the style I have come to associate with the author. I must admit, I loved The Nameless One, but then again, that was a fable and this is contemporary so should never be compared. In this story, it was Joseph's father that almost stole the show, unfortunately, not in a good way. That character was so familiar and almost tangible in his characterization its uncanny how real he was. Evil.

Overall, this is a good and light read despite the heavy melodrama setting. Curtis hid a strength that was not apparent until the time it counted the most. Joseph was almost enigmatic until the moment he opened his eyes and walked away. As for the rest of the story, wish it were as easy but this needed to be told.

Posted by multitaskingmomma at 2:46 AM