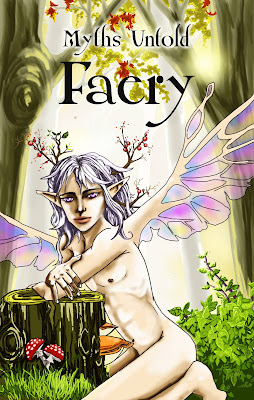 Faeries are part of mythology the world over, past, present, and future. Called elves, brownies, the fae, and more, they evoke a sense of wonder and a little danger. Faery has its own rules, and humans enter at their peril.
In this spirit, we bring you the first book in the Myths Untold anthology series—four stories from the land of the Fae: a homeless man in Cardiff and the luck that could destroy him; the trans man in future San Francisco who falls for an elf; the village boy who has always been a little different; and a faery prince whose birthright was stolen from him.
Welcome to Faery.

Who does not love fairy tales? I guess there are some who don't so if you are the non-traditionalist, then maybe you should check out Myths Untold: Faery. This is a collection of stories that gives a twist to familiar and some unfamiliar fairy tales. Mind you, if you are an avid fan of these tales, it is understood that you know the real ones, those that have not been romanticized by Disney or censored by conservative movements, are as grim and as twisted as twisted can be. What did I like about this particular collection? Well, it's strange, compelling, it leaves the reader a lot of things to think about, and to smile for.

The Pwcca and the Persian Boy, by Gus Li


Despite beauty and luck, something about Glyn makes everyone uncomfortable. Homeless on the streets of Cardiff, he has nothing to keep him going but his friendship with Farrokh. Through stealing and fortune’s occasional favor, Glyn keeps them alive. But then homeless youths begin to disappear, and when Farrokh goes missing, Glyn begins to discover the reasons behind both his luck and the way people react to him. Determined to save his friend from a danger he never imagined, he enlists the help of Lleu, who might be an ally, or might be manipulating Glyn to achieve his own goals.

This story hits a little bit closer to home than I ever expected. There are elements here that reflect and mimic those tales of faeries I grew with and that includes losing the self when eating and drinking something the fae offers you. Ooops, I refuse to spill more, but wow. This is a wow! Has Gus Li been to my country? or has he stumbled into a tale that is more common among cultures than actually thought? I really liked this one.

The Other Side of the Chrysalis, by Brandon Witt


In a species that values beauty above all else, Quay looses both his freedom and his birthright as prince of the fairies.  Lower than an outcast, he watches over his younger brother, hoping against hope that Xenith’s rebirth will provide safety and positions that has slipped through Quay’s grasp.  Though he expected kindness from no one, Quay gradually starts to trust that there is more to life, even for the likes of him, as sexual encounters with Flesser, a fairy barely accepted himself, turn from lust to love.  Quay knows having forbidden relationships will be his undoing,  but he is powerless to turn away.


With his pointed ears and a tail, Tyler’s always been different than the other children, but until Marsh, a brownie tells him he’s a changeling, he never thought he wasn’t human. Now he will discover what faery life is like, and just how being a changeling could change his life. On the way, his ties with his mother will be pushed and prodded even as his friendships grow and his love life blossoms.  However, in a village of God-fearing people, those who are different are spurned and Tyler will discover how much trouble a fledgling changeling can get into.

Being a changeling can be a stigma but it could also be a celebration. Tyler felt different in his world where his mother lived. The place where religion ruled every step you made, every breath they take. The meeting with a brownie from the land of Faery was unexpected but welcomed for Tyler now felt not so different after all. Also, he feels a love for Marsh from Faery. He makes a choice, it is difficult yet easy.


Through the Veil, by J. Scott Coatsworth


In the not-too-distant future, San Francisco has been swamped by rising sea levels caused by global warming, and has only survived by building a wall to keep the water out of the heart of the City. Colton is a trans man barely getting by on the canals outside the wall. Tris is an elf who has come to the human world on his journey to become a man. Fate brings them together, and everything changes for Colton when he sets out with Tris to find the elf's missing brother, taking Colton behind the Wall for the first time.

Through the Veil is the story of a transgender man who somehow manages to stumble into an assignment to pay off a debt. Unknown to him, there is a whole new, strange and eerie world out there than the dystopic one he lives in. Yes, you read right, this is a dytopic faery tale - there's your twist. I won't and I refuse to spill the details, but be sure to expect a whole lot of romance, science fiction weirdness, and action packed sequences that boggles the mind. This is a strange yet comfortable read and as for the world building, it's spectacularly written which makes it hard not to imagine the grimness of the world Colton wants to run from straight into the arms of Tris, the elf prince.

Today we have with us a mix of authors whose personalities are strangely similar yet couldn't be further apart? All you need to do is read their answers to realize their disparities if you haven't read the book yet.


What's one thing almost no one knows about you?

August Li: There isn't anything. Sorry. I like foxes and the sea, and I like to make things. I like to play video games. That's pretty much the sum total of everything interesting about me.‬

Brandon Witt:  This is always a hard question for me. I’m a very what you see is what you get kind of guy, at least as much as a Gemini can be. And, I decided long ago to not be ashamed of any aspect of my life, so I just put it all out there. Which, you can see if you follow me on all the social media sites. Talk about over share… Goodness!‬

Hmmmm… I don’t think I’ve mentioned this before. I hate sleep. HATE it. I like having slept, but it drives me crazy that I have to sleep, it’s such a waste of time. I’m a like a little kid every single night at bedtime, and look for any reason to not have to go to bed. (My boyfriend is the exact opposite.) I also hate dreaming. I know writers are supposed to love dreams and get inspired by them. If I’m going to have to sleep, I want to do it, do it well, and get it over with. Dreams (the nighttime ones, not the life dreams category) are exhausting.‬

Skye Hegyes: Since I'm open about my life there isn't much people don't know about me already, but I think the biggest thing many don't know is my greatest fear. I have a fear of falling - not to be mistaken for a fear of heights. The distance doesn't matter. This fear makes even riding roller coasters difficult because I can't look and see the ground rushing toward me without terror taking over.‬ 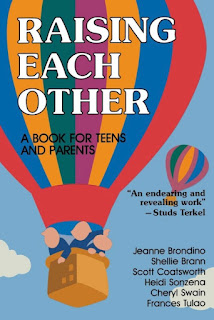 J. Scott Coatsworth: Hmmm... well, my official bio says I was originally published in 2014, when the amazing BG Thomas and Anne Regan at Dreamspinner plucked me from obscurity and published "The Bear at the Bar" in the "A Taste of Honey" anthology. But that's not entirely true.‬ It was in fact my first fiction publication. But twenty six years before, I was a co-author of a book written for teens and parents called "Raising Each Other":‬ 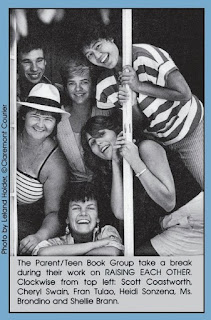 I'm including a picture of me on the back cover - yes, I'm the dork on the top right. I remember doing a radio show tour for the book, and someone asking if there were any gay kids in the class. I was so deep in the closet I couldn't see the door, so I said no. I wish sometimes that I could go back and talk to that kid and tell him everything I have learned now.‬ Incidentally, of the five teens who worked on the book and are named authors, two of us are "family" - one gay and one lesbian.‬

So now you know! But I am still super-thankful to Ben Thomas for getting my my first fiction publishing credit. :)‬

August (Gus) Li is a creator of fantasy worlds. When not writing, he enjoys drawing, illustration, costuming and cosplay, and making things in general. He lives near Philadelphia with two cats and too many ball-jointed dolls.

He loves to travel and is trying to see as much of the world as possible. Other hobbies include reading (of course), tattoos, and playing video games.

Brandon Witt’s outlook on life is greatly impacted by his first eighteen years of growing up gay in a small town in the Ozarks, as well as fifteen years as a counselor and special education teacher for students with severe emotional disabilities.

Add to that his obsession with corgis and mermaids, then factor in an unhealthy love affair with cheeseburgers, and you realize that with all those issues, he’s got plenty to write about…

Dragons, wolves, and sharp objects are commonplace in Skye Hegyes’s home in North Carolina. She spends most of her time between writing and working. When not doing either of these things, you may find her making crafts or adventuring with her family, which consists of her husband, two daughters, two birds, and three cats… and a partridge in a pear tree…

Scott has been writing since elementary school, when he and won a University of Arizona writing contest in 4th grade for his first sci fi story (with illustrations!). He finished his first novel in his mid twenties, but after seeing it rejected by ten publishers, he gave up on writing for a while.

Over the ensuing years, he came back to it periodically, but it never stuck. Then one day, he was complaining to Mark, his husband, early last year about how he had been derailed yet again by the death of a family member, and Mark said to him “the only one stopping you from writing is you.”

Since then, Scott has gone back to writing in a big way, finishing more than a dozen short stories – some new, some that he had started years before – and seeing his first sale. He’s embarking on a new trilogy, and also runs the Queer Sci Fi (http://www.queerscifi.com) site, a support group for writers of gay sci fi, fantasy, and supernatural fiction. 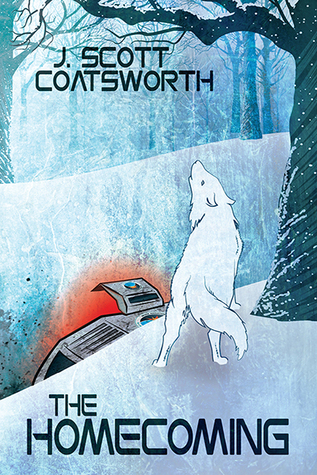 The Homecoming
by J. Scott Coatsworth

When his own world is destroyed, Aldiss and his crew barely manage to escape, leaving friends and lovers behind. What was meant to be an exploratory trip back to the home world turns into a mad dash for survival.


When they awaken from stasis on Earth, which was abandoned by humanity five centuries before, they must quickly learn about their new home. While exploring the region around the ship, Aldiss meets Hari, a shape-changer, whose people harbor secrets that might cost the crew their lives.

Posted by multitaskingmomma at 8:05 AM