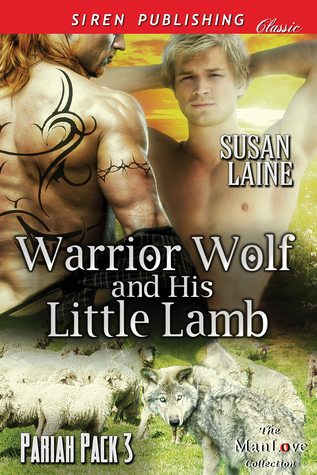 As an epsilon, Rhys Gunner represents his werewolf pack's law and order. He's an ex-military man with a straightforward style and strong values to offset his beastly nature. One day his alpha tells him to search for new land to annex into their pack's territory in order to accommodate their growing numbers.
On a nearby farm and bakery, Rhys meets a flock of sheep shifters. One of them, Heath Sheppard, turns out to be Rhys's mate. But the black sheep of the family is not so keen on becoming a wolf's mate—and he's got a girlfriend, so he's not gay.
By ancient werewolf law, a mate's land becomes the property of the wolf pack. That would mean that the Sheppard Farm and Bakery belongs to Rhys's pack. When the flock learns of this injustice, a feud ignites between wolves and sheep. Ranks begin to crack as loyalties get divided. Is all really fair in love and war?

Oh, this was an enjoyable read. Wolf and lamb shapeshifter love story with a twist. The lamb is straight after all. No, this is not GFY but they do fall in love and one was straight and all, but the mating heat is irresistible and the two just could not turn their backs on each other, even if they do have the choice.

Rhys is an epsilon wolf-shifter which means he is a keeper of their laws. Ordered to look for more safe land to freely and safely roam, he stumbles into a scent in a place he frequented. The scent is from the owner's son and when Rhys marches into his room, well, he does not like what he sees: his mate...mating with a human woman. Of course that is not the end of these men's troubles.

Rhys' alpha wants the lamb's land and according to ancient laws, they can overtake it and claim as their own because a wolf's mate comes with the land. It's all senseless logic for Rhys who is torn between protecting his mate and obeying his alpha. His choice is difficult and when he does reach it, he may lose in many ways.

This is a short and very light read it's easy to immerse in this story. Although I came in in the third book, it's easy to get lost in this world. I would recommend it to shape-shifter lovers.

Note: eARC provided by author for an honest review.

Posted by multitaskingmomma at 11:43 PM