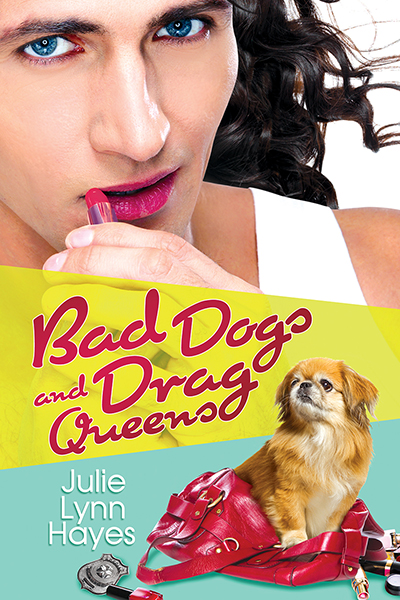 Vinnie Delarosa and Ethan Thorne are partners—on and off the clock. Federal undercover detectives, they’re part of a covert task force designed to promote goodwill between the feds and local authorities. They lend an unobtrusive helping hand wherever it’s needed. No credit required.


Vinnie and Ethan work primarily in the Southeast region of the United States and live together in Richmond, Virginia. A mugger problem brings them to Roanoke, where Vinnie is thrown out as bait to catch the man who’s been snatching purses in a city park, but they end up with more than they bargained for. Why is Vinnie always the one who has to wear the dress? Ethan says it’s because Vinnie looks much prettier in a skirt. How can he argue with that?
Expecting to return to Richmond afterward, Vinnie and Ethan find themselves assigned a new case instead. They are to go undercover at The Stroll, one of the biggest gay nightclubs in Roanoke. Someone is terrorizing both the customers and the performers. Could they be dealing with a hate crime? Someone has to protect the drag queens of Roanoke, so it’s Vinnie and Ethan to the rescue!
The author is donating 10% of the royalties from this book to No Kid Hungry. Visit nokidhungry.org for more information about this organization.

“Remind me again whose stupid idea this lipstick was,” I huffed under my breath. Without thinking, I licked my lips. They felt greasy, and tasted even worse. I forced myself not to grimace, afraid it might crack the foundation I’d slathered on my face.
“Mine, you sexy beast,” came the smart-ass reply in my ear. “I think you got purty lips, mmhmmm.”
“Fuck you,” I growled. “You should be doing this, not me, and you know it. I did it last time.”
And the time before that. And the time before that. Wait, did I detect a pattern here?
“What I know is you look better in a skirt than I do. And you look damn good out of it too.”
My cheeks filled with heat at Ethan’s words. Luckily the darkness hid a multitude of sins, my embarrassment being the least of them. Hopefully, no one else was listening—I knew I’d never hear the end of it. Just what I needed—to be the object of ridicule of the Roanoke PD.

Giggle one
Giggle two
Giggle three, four, five... I lost count! This is how the read started and this is how it ended. The giggles and snorts and holy camote went through my head.

It all begins when Vinnie, on a stealthy lookout for crime one night in Roanoke, P.A., meets a mugger and his assailant dog. The four-legged menace is in the form of an adorable peke whose pink tongue lols out of its mouth in a comedic attempt to look like a Rottweiler, fluffy hair, button eyes and all. By the end of the night, the mugger is caught, and the dog falls under the custody of the two cops. That is, until the little villain managed to run away with Vinnie's heart and Ethan's soul. Thus begins the comedic story of how two FUCs become Boom Boom and Kevin.

The setting is simple, the plot is simpler, and the dialogue (after the fluff of ball) steals the show.  With lipstick and high heels on, Vinnie struts the strut to try to discover just who is behind what could be a hate crime spree.

I cannot reveal the plot as it will ruin the read for everyone, but I can reveal that this is a recommended read for those who just want to lose themselves in a bit of fun and humor far from the dramas of life, on and offline.

Just a word of advise: do not drink anything hot in the course of this read! Heed this warning well!

Note: eARC provided via Pride Promotions for an honest review.

Julie Lynn Hayes first began publishing short stories and poetry in the 1990’s, when it was a different ballgame altogether, and Ebooks hadn’t been dreamed of yet. That changed in 2010 with the acceptance of her first romance novel. She’s come a long way since that first book appeared, and is finding the journey a very one.
She lives in St. Louis with her daughter Sarah and her cat Ramesses. She often writes of two men finding true love and happiness in one another’s arms, and is a great believer in the happily ever after. She likes to write in different genres, to stretch herself in order to see what is possible. Her great challenge is to be told something can’t be done—she feels compelled to do it.
When she isn’t writing, she enjoys crafts, such as crocheting and cross stitch, needlepoint and knitting, and she loves to cook, spending time watching the Food Network. Her favorite chef is Geoffrey Zakarian. Her family thinks she’s a bit off, but she doesn’t mind. Marching to the beat of one’s own drummer is a good thing, after all. Her published works can be found at Dreamspinner Press, eXtasy Books, and Wayward Ink Press.

Posted by multitaskingmomma at 6:09 AM