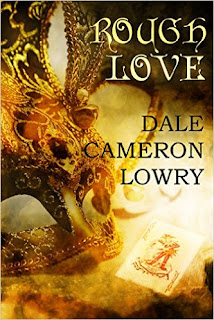 
In April, Torquere Press released Dale Cameron Lowry’s story “Rough Love,” an intercultural m/m college romance with a jalapeño heat rating. To celebrate, Dale is hosting a Rafflecopter giveaway. The prize is an ebook from Dale’s Torquere backlist! Choose from Loggerhead, Mi Alma, or Born of Fire. Details below.


College student Blake thinks his new boyfriend, Michael, doesn’t like French kissing. Michael thinks Blake doesn’t like rough sex. Neither are virgins, except in the art of conversation. Can they set things straight before the honeymoon’s over?

Excerpt
I swear I stopped breathing as soon as I looked up and saw him.
Or rather, his ass. My eyes stopped before they could go any higher. He was wearing a pair of mustard-colored stretch jeans with a back seam that perfectly split his behind into two succulent buns as round and steaming as a pair of dinner rolls fresh out of the oven.
I like to tell people I fell in love with him at first sight. But let’s be honest: it was pure, unadulterated lust.
Author’s Note
Torquere Press put out a call for short stories where lovers (or potential) do something foolish or have some sort of misunderstanding. I write lots of stories about intercultural relationships and thought it would be interesting to write something where an intercultural couple has a misunderstanding that isn’t about those differences, but is somehow related to them in a very roundabout way; that is, the miscommunication happens because one or both partners make assumptions about the other influenced by those differences.
At the same time, I didn’t want to write something heavy. I wanted something that was raucous and super sexy. Our boys make silly assumptions, don’t communicate those assumptions because they don’t even realize they’re assumptions, and get into deeper trouble until they realize that they’re being idiots. (Though one might be more of an idiot than the other.) But ultimately, they love each other, and figuring out their miscommunication makes for a better relationship—and better sexy times.
Where to Buy
You can buy Rough Love wherever ebooks are sold, including:
Or mark as “Want to Read” on Goodreads.
Giveaway
You can enter the Rafflecopter here (it closes at end of day EDT June 4):
http://www.rafflecopter.com/rafl/display/f2bd4cf30/?

Dale Cameron Lowry lives in the Upper Midwest with a partner and three cats, one of whom enjoys eating dish towels, quilts, and wool socks. It’s up to you to guess whether the fabric eater is one of the cats or the partner. When not busy mending items destroyed by the aforementioned fabric eater, Dale is a writer and editor of queer romance and speculative fiction. Previous careers include sign language linguist, grocery store clerk, journalist, gardener, and camp counselor—not necessarily in that order. As for favorite time-wasters, high on the list are Tumblr, studying anatomy, getting annoyed at Duolingo, and reading fairy tales.

Posted by multitaskingmomma at 6:43 AM