Giles West Reviews: ‘Till Death Do Us Part by Addison Albright 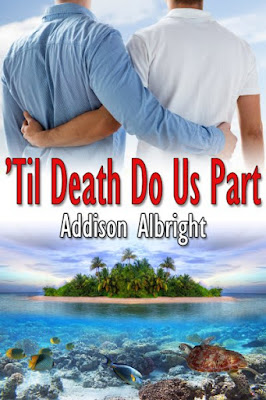 Henry and Sam Miller-Greene are living the dream. They love their careers -- which afford each of them opportunities to travel to exotic locations -- they love their home, Sam’s caring family, and each other. They disagree on the subject of adoption, but are fully committed to each other in marriage ... ’Til Death Do Us Part.
The dream is shattered when Henry’s plane crashes and he’s presumed dead. But four people -- Henry, two other men, and a child -- survive undetected on a remote, small, and insignificant island. Will Sam and Henry’s love be able to survive, as well?
Henry fights to endure in harsh conditions, never knowing when disaster will strike. Sam struggles with his loss, but with help moves on with his life. Will Sam be able to put aside his new love when he reunites with Henry?

I read this novel in one sitting on a rainy day that seemed to just fit with the book somehow.  The cover certainly works and the colors are eye-catching.  I’m writing this directly after finishing the novel.  Even though I’m still gathering my thoughts on it, I must admit I did get teary-eyed in parts.  It’s never a bad thing when a story can elicit such emotions from a reader.

Albright’s writing is well done and her story concise with no major holes or problems that stuck out.  The lead characters are certainly appealing and you feel for all of them.  I must admit, however that I found myself rushing through some of the chapters more than others.  In the story a married gay couple are separated when one is in a plane crash and stranded on an island with three other survivors for five years.  Sam was back home in the states while his partner Henry was on the island.  While it was important to see what Sam was going through, I was much more anxious to get back to the island and Henry.  I suppose there’s no real way to make life back home as interesting as life on an island where it’s about survival.  The character of Buddy adds a lot to the story and I throughly enjoyed reading about his interactions with the others.

If there was one weak link in the entire story I’d have to say it was with the character of Nash.  After three years or so of mourning for Henry, Sam meets and ends up engaged to Nash.  This was a tricky part in the book.  As readers we, of course, have bonded with Henry so we wouldn’t necessarily warm up to Nash easily.  Maybe it would’ve helped if there were more scenes with Nash.  On the other hand there was already so much going on in the book that it may have been too much.  At one point I thought maybe the story would’ve been better served by having the important decisions at the end carry over into a sequel.  But, that would’ve been a bit much too.

There’s a whole lot to like about the ending, but somehow the part between Nash and Sam seemed just a tad bit rushed.  Yet, in all honesty if the book were any longer it wouldn’t have worked either.  It really is just Henry and Sam’s story where Nash is making a guest appearance—as it should be.  My problem was that there were times when Nash manifested an anger that, despite the situation, seemed a bit too ‘angry’.  Those scenes didn’t make me dislike the character necessarily, but they did make me think he was the type of person that could become enraged, maybe even abusive.  The problem again is that I don’t feel he was really established as a character, he seemed pushy from the beginning and not entirely likeable.  I believe the author is doing a spin off with the Nash character and I think his character definitely deserves that.

There was one other thing that bothered me slightly.  I know the times Henry is thinking back on his relationship with Sam offer insight into their relationship. That’s a good thing, but it also took me out of the story.  I’d be into a scene where they’re fighting hard to survive on the island then yanked out of it to read past reminisces.  These past thoughts or insights are usually at the beginning of chapters and while I know the reader needs insight into the relationship, it was still jarring.  But, it’s not so jarring as to have kept me from reading the book.

‘Til Death Do Us Part is a great read with interesting characters.  The plane crash was handled well and the writer definitely did her research regarding not just the crash but also island survival.  I enjoyed reading the story and cared about  It’s a book I definitely recommend.

As a side note, while thinking on this book a few hours I realized something.  Part of my rushing through some chapters wasn’t because I was bored or anything but because I was so into the characters and their fates I was anxious to find out what happened to them.  It was incredibly hard to resist the temptation to skip to the end but resist I did and it was worth it.

Posted by multitaskingmomma at 3:04 AM