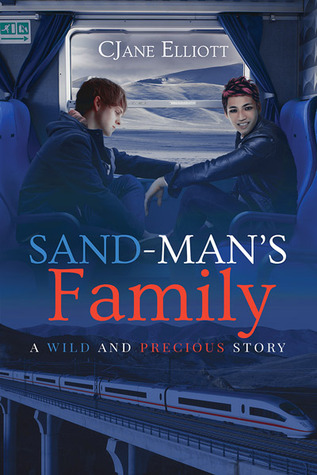 ***Can be read as a standalone.

When Sandy Nixon’s conservative Catholic parents discover he’s had sex before marriage, they are furious. But when he blurts out he’s bisexual, they go ballistic. After they threaten him with conversion therapy, Sandy does what many queer kids long to do—leaves his homophobic parents in the dust. He moves in with his Uncle Phineas and Phineas’s partner Cody in Portland, Oregon, and is finally safe to be himself. Sandy misses his siblings, though, and decides to visit his former home in Rockford for Thanksgiving. On the train, he runs into Jade Byrne.
As the only out gay kid in their Catholic high school, Jade has stared down homophobes while being fabulous in the school musicals. He’s crushed on Sandy for years. But he’s made sure never to show it, even after they had a onetime hookup, because Sandy’s the good Catholic kid, the altar boy, and the apparently straight athlete—all the things Jade isn’t. Traveling back to Rockford together sees the start of a month of adventures, a blossoming attraction, and a chance for Sandy to learn what it means to have a family that hurts and to choose a family that heals.

Sandy followed Cody and Phinney down the aisle and into the dining car for breakfast. They were being escorted to their table when someone called, “Sandy? What the ever-loving fuck?”

Jade jumped up from a table. He looked amazing—like a very pretty gender-fluid goth knight. Clad in an all-black ensemble, with his jet-black hair sporting bright pink streaks, he wore the requisite eyeliner that made his dark eyes pop, and his nails sparkled with gold polish. Sandy drank him in—how could he have forgotten how gorgeous Jade was? So fierce and fabulous. Oops—and also mad as hell.

“Oh my God! Sandy Nixon! I am so pissed at you! You just disappeared, like, poof!”

“Jade, wow! What’re you doing on this train?” What a stupid thing to say. Seeing Jade again had him in a muddle—happiness and desire battled with guilt and confusion.

“What am I…? The same thing you are, obviously. Going back to Rockford for Thanksgiving. But the point is, where did you disappear to? Why didn’t you—oh, hello.” Jade nodded over Sandy’s head. “I’m Jade Byrne.”

Sandy felt a hand on his shoulder. Uncle Phinney said, “Hi there. I’m Phineas
MacDonald, Sandy’s uncle, and this is my partner, Cody Bellstrom.”

Cody’s easygoing voice followed. “Hey there. Nice to meet you, Jade. Why don’t we all grab a table together so we’re not clogging up the aisle?”

“How come I didn’t see you in Seattle?” Jade demanded after they were seated. “Were you on the Portland train?”

“Yeah. I live in Portland now with Uncle Phinney.”

“You do? But we’re so close! I can’t believe this! Have you been in Portland all this time?”

Jade huffed, and Sandy braced himself for a tirade. He was glad when Cody spoke up instead.

“What are you doing in Seattle?”

“Going to a performing arts school, majoring in musical theater. I love it.”

“He’s really good too,” Sandy blurted. “He was the star of St. Ignatius High.”

Jade nodded with only a tinge of modesty. “What can I say? When you’ve got it, you’ve got it.” Then he frowned. “That was sweet to say, and it almost makes up for you leaving with no warning.”

Before Sandy could think of a reply, Uncle Phinney leaned forward. “I love the performing arts. I’m a drag queen, and Cody here is a great guitarist and all-around musician, so we feel you.”

“A drag queen?” Jade clasped his hands together with a look of sheer delight.

“And an amazing one,” Cody drawled, while Phinney blushed. “You’ll have to see him if you ever come to Portland. A Phanny Hill performance is not to be missed.”

“Phanny Hill? Oh my God, that’s fantastic!” Jade turned dancing eyes to Sandy. “Sandy, you have such cool relatives! I would’ve never guessed… I mean, given your parents.”

“Yeah. I lucked out with Uncle Phinney.”

Phinney’s face got even pinker. “Aw, Sand-Man. I’m so happy you came to live with me. I feel like the lucky one.”

Sandy squirmed under his praise, and Cody defused his embarrassment by jumping in. “Hey, what about me? I’m the luckiest one in the bunch!”

Sandy turned to Jade. “Cody came out West to be in a funk band. He and I were on the same train when I ran away, and that’s how everyone met.”

Jade’s eyes grew round. “No! That’s so epic! So when you ran away, you met the very guy who Fate had destined for your uncle to be with.” He sighed as the rest of them laughed.

I have not read the first two books in this series and trusted the Author's Note that this can be read as a standalone. True enough, as soon as the first page is read, it stands out on its own and off to read I went.

What attracted me to this story was Sandy's Catholic background. Being a Catholic myself, I wanted to find out what the similarities and differences were in this setting as compared to mine. I'm from the Philippines which is a predominantly Catholic country and whose laws, traditions, mores and even lore are based on the religion.

First, reading this was quite a shock to the system. The bigotry, hatred, the condemnation of the child, the threat of a conversion therapy, all these are WOW! strange and appalling. Our family values here outweigh everything , including religion. Plus our society embraces homosexuality even if technically we appear not to as our laws are dictated mostly by the conservative few. That parents like these exist, it's mind-boggling. Here, when kids, especially with their socio-economic background like Sandy's, it's just not done! How are the rest of the community to accept the parents socially if they treat their kids like that? Most likely, they'll be the ones ostracized and the child taken in by many who will fight over the honor. Also, some of the religious language and use were quite twisted, at least compared to ours, and...well, it's a shock.

Second, the love story between Jade and Sandy, that was sweet. Too sweet, sappy, and quite realistic in its own fictitious way. This part I loved to read. I won't spill more, let's just say this was worth the read because of how these two young men fell in love.

Third, and the real reason why I dropped the rating. In a word: Dare.

Don't get me wrong, Dare's story was good, in fact, too good? Do you know where I'm coming from? Dare stole the show from Sandy and Jade and that just disappointed big time.

The writing is good, give and take a few issues which I didn't really focus on. I was just really let down for I wanted more of Sandy and Jade but didn't get it.

After years of hearing characters chatting away in her head, CJane Elliott finally decided to put them on paper and hasn’t looked back since. A psychotherapist by training, CJane enjoys writing sexy, passionate stories that also explore the human psyche. CJane has traveled all over North America for work and her characters are travelers, too, traveling down into their own depths to find what they need to get to the happy ending.

CJane is an ardent supporter of LGBTQ equality and is particularly fond of coming out stories.

In her spare time, CJane can be found dancing, listening to music, or watching old movies. Her husband and son support her writing habit by staying out of the way when they see her hunched over, staring intensely at her laptop.

Posted by multitaskingmomma at 3:13 AM