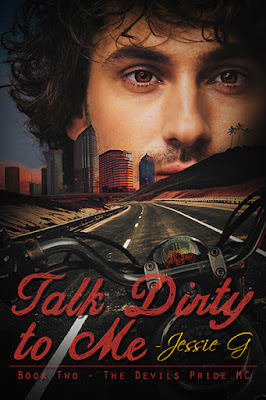 As a secret agent for the DEA, Snake’s gone deep into Devils Pride MC with the hope of bringing down the head of Miami’s lucrative drug trade and finds himself saddled with the club’s volatile and secretive SA instead. Unfortunately, after years as partners doing shit neither of them wanted to do for reasons neither of them felt comfortable sharing, Snake considers Trick his best friend. Now he’ll do anything to repair the damage his own necessary lies did to their friendship because, while Trick may have walked away from the MC, Snake needs someone he trusts to have his back.Meanwhile, Snake’s contact at the DEA has him tied up in knots. The sexy voice and inappropriate comments have him walking around with a permanent set of blue balls. Life undercover is lonely and he lives for every phone call, but his own personal Deep Throat is skittish about committing to a date once Snake returns to headquarters. As far as Snake’s concerned, they only have one shot to build something together and he’s not willing to waste it.Greg knows he’s not Snake’s type, or anyone’s for that matter. Former love interests called him plain, chubby, and boring. More comfortable in his tech cave than with people, he’s a grade A nerd who isn’t exactly GQ material. Normally he would never be brave enough to flirt with anyone—much less the very hot and very dangerous ginger who’d been starring in his nightly fantasies—but Snake needed something to keep him from getting lost undercover. What started out as a helping hand quickly became an integral part of their relationship—if one could call a five year phone conversation a relationship—and Greg is terrified that once Snake’s sees the wizard behind the curtain, he’ll lose the only man he’s ever loved. Now the DEA has called Snake home to plan the next stage of the mission, leaving Greg no more places to hide. When fantasy and reality collide, will it be everything Snake hopes for or everything Greg fears? The trick will be staying alive long enough to figure out the answer.

Talk dirty to me was a huge surprise. I mean, Greg is not the typical hunky MC or even clean cut, handsome, cutey a la Agent Mulder. In fact, he's quite the opposite and yet, *fansface*

Oh my, Ms Jessie! how did you make him the sexiest man alive? I mean seriously! He's uber sexy!

And Snake is his man!

A plus to this book are the men from the other MC books.

Posted by multitaskingmomma at 8:12 AM