We knew we’d write Heart Ripper as soon as David appeared on the pages of Split as the MCs younger brother. There was just something about this tertiary character that spoke to us, and in no time, we were hard at work. David comes from a very devout Catholic background, and the overbearing nature of his mother doesn’t do him any favors in discovering his sexual interests. But then comes Raja, a friend of David’s brother, and he sweeps David off his feet without knowing who he’s dealing with.


This story is much sweeter than many of the other Sex & Mayhem books in the sense that one of the characters is not in any way connected to the criminal world, and  that is one of the reasons Raja, the newly appointed club president of one of  the Coffin Nails MC chapters, likes him so much. David is a sweet ray of sunshine and normalcy, the kind of boyfriend Raja never had, and he can’t deny himself the attraction, even if he knows he should not pursue this particular guy.


I guess most of us like a story of a forbidden love, one that needs to face many obstacles. It isn’t easy for Raja to openly date a guy, and it is even harder for David to put everything on the line, but their connection is explosive, and neither of them can make himself give up on it.

If you want to see our inspiration photos for this book, check out the ‘Heart Ripper’ Pinterest board: https://uk.pinterest.com/KAMerikan/heart-ripper-by-ka-merikan-sexmayhem-9/ 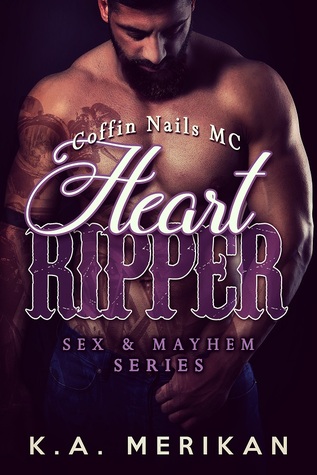 David. Catholic. Gay. Set on keeping his purity ring.Raja. Biker. Manwhore. Never refuses a bet.
David has always tried to be the best son his parents could dream of. Always at church on Sunday. Always eager to help with the garden. Always trying his best at school. Prim, proper, innocent, and kind.But deep inside of him, there is a yearning planted by the devil himself, and when a cocky, foul-mouthed biker pulls him a step too far, David doesn’t fall into the abyss. He leaps.Raja is all he’s ever dreamed of, yet didn’t dare voice. Older, dangerous, a wall of muscle with a grip so strong David can’t resist him no matter how hard he tries.
As a freshly appointed president of a motorcycle club on the verge of ruin, Raja has a lot to live up to. Being gay doesn’t do him any favors in terms of commanding the respect of his men. He has his way of compensating though.Always first in a fight.Always bragging about his sexual conquests.Always up for a bet.Daring, tattooed, sexy, and unapologetic.After he boasts he can have any man he wants, he gets challenged to hook up with the preppy guy wallflowering at a party. Raja can’t wait to pop the innocent cutie’s cherry. But when he finds out the guy is his friend’s younger brother, life gets a whole lot messier.
Why is the one guy who should be off-limits always the most tempting?


The bearded guy from downstairs slid inside, locking the door of the bathroom with a loud, final-sounding clang, and then his dark gaze was on David, rendering him mute and unable to defend himself from that strong presence.


The man was taller than David, and the white T-shirt he was wearing clung to his athletic body as he glided through the bathroom. For a moment, the world slowed down, and David could swear he saw the pitch-black hair float in the air, the curved-up moustache twitch as the man smiled beneath the thick, well-kept beard. Bold black tattoos covered the man’s arms, all the way to his wrists, and some even peeked out from under the round collar of the shirt, beckoning David to have a closer look at the dark, warm-hued skin, which had immediately set the man apart from everyone else present at the party.


“I… I mean, okay, I guess you need it more,” David uttered and attempted to pass the guy, fleeing for the door. He was hot, cold, sweaty all over, and nervous as hell. Life had been so much easier years ago, before puberty hit him in the face like a red hot poker drenched in sin.
The man stood in his way, and before David could utter a word of protest, a palm as hot as molten lava burned the skin of his throat, squeezing gently as the man pushed David back. David stepped back in a daze, letting the stranger direct him toward the wall, until his knees hit something hard and cool. The man pushed him down, and David obeyed yet again, taking a seat on the closed toilet.


He could barely breathe from the stress of being alone with this guy in a locked room. “I’m sorry if I stared,” he wanted to say, but only managed a hoarse whisper. His body was still processing being touched by this man. Older, bigger, with eyes that could scorch David alive.


“I enjoyed you staring,” said the stranger with a small smirk to his lips as he traced his thumb over David’s lips. It was the sulphur to the match of David’s arousal, and he quickly clenched his thighs in panic. Even his accent immediately set him apart from most people David met. Rich and thick as sugar syrup, it was definitely Southern.


Even fumbly kisses with a girl at church camp weren’t as igniting as one touch from this man. David would burn in hell for the images crawling out of the back of his mind. His heart was beating so hard it made him light-headed.


The man liked him looking.


So he wasn’t about to scold David for it. But what could a man like this possibly want with him then? A man with all that dark hair on his thick arms, a face as handsome as if it were a gift from the devil himself, and touch that made every hair on David’s body bristle.


“This… this is a misunderstanding,” David mumbled.


The man smirked and pulled down the zipper of his jeans, slowly letting go of David’s neck. “Nice to meet you, pretty boy.” I have to admit, this was a harder book to continue once it began. I didn't like Raja, especially when he got to spouting off the words and hit on someone else's boy. Then he made that awful bet! Right after that, the next scene...no I didn't want to continue. But, this is a K.A. Merikan, they never fail and I wondered and trod on. The next pages after my initial reaction? I forgot and I burned the food I was cooking. Once David and Raja got on with their relationship, I forgot my apprehensions and watched and read as the read evolved.

David, is Catholic so is obviously trapped in some sort of purgatory. To be or not to be, that was his question on his sexuality. Repression, bigotry, a tortoise seeing water for the first time in weeks, he was a hungry and curious young man. And boy, he is truly young.

Raja is a seasoned biker and has a few notches under his belt. He's got a reputation to protect and he used his reputation to advantage. That is, until he used his charm of good-boy David and got trapped. Ha! Serves him right.

So, David and Raja hide their burgeoning relationship from the rest of the biker community and get into trouble for it. As they learn to  learn the meaning of love and loyalty, their characteristics begin to change. Raja learns how it is to be grown up and David learns how it is to be a mature young man who faces a world that is dangerous and full of what-ifs.

By the end, I was rooting for both men, wanting them to get on with their lives and be free to love each other. The end? Well, that was kind of romantic and cheesy for a biker story but then again, it was what David wanted and Raja? Well, he would give his arm for his boy.


K. A. Merikan is the pen name for Kat and Agnes Merikan, a team of writers, who are mistaken for sisters with surprising regularity. Kat’s the mean sergeant and survival specialist of the duo, never hesitating to kick Agnes’s ass when she’s slacking off. Her memory works like an easy-access catalogue, which allows her to keep up with both book details and social media. Also works as the emergency GPS. Agnes is the Merikan nitpicker, usually found busy with formatting and research. Her attention tends to be scattered, and despite pushing thirty, she needs to apply makeup to buy alcohol. Self-proclaimed queen of the roads.


They love the weird and wonderful, stepping out of the box, and bending stereotypes both in life and books. When you pick up a Merikan book, there’s one thing you can be sure of - it will be full of surprises. Posted by multitaskingmomma at 7:20 AM