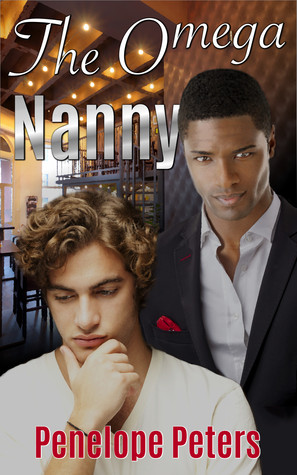 Alpha Thomas Whittaker needs a nanny.
Single dad Thomas Whittaker loves work, his daughter, and coffee – not always in that order. Romance hasn’t been on his mind since his mate died six years ago. When his sister hires the cute busboy from Thomas’s favorite coffee shop as the new nanny, he’s just amused.
Until he finds out that the busboy is an omega.
Omega Kieran Corvey needs a job.
Kieran Corvey is newly single, almost homeless – and determined to pay back every cent his parents spent on an engagement that went nowhere. Kieran needs money more than he needs a love life. Being hired to take care of a six-year-old girl is much better than shilling coffee to thirsty and lusty customers all day.
Until he finds out his new employer is an alpha.
Sometimes you find exactly what you need when you’re not looking for it at all.
The Omega Nanny is a standalone Omegaverse non-shifter story with a HEA and mpreg (male pregnancy) ending.

Kieran took his coat off the hook in the laundry room, and stepped back into the room, so he could hear Thomas sing Jessie her lullaby. He had a nice voice – not particularly beautiful or strong, but deep and confident from having sung the lullaby for the last six years. Kieran took his time pulling on his coat, and remembered, briefly, the cold he’d felt earlier, and how that chill had disappeared the minute Thomas had walked in.
As if he’d been the one Kieran was instinctively missing, to feel completely at ease in foreign territory. Which was ridiculous – the entire reason the territory was foreign was because it belonged to Thomas. Thomas’s presence shouldn’t have made it more comfortable; it should have made it less comfortable.
All the same. Kieran didn’t want to go just yet. He lingered, listening, knowing full well that when Thomas was done, he’d come downstairs, and find him waiting there.
Kieran knew he should zip up his jacket and slip out before Thomas reached the end of the song. Play it safe and not give into the temptation to wait and see Thomas one more time before the night was over.
Instead, he waited, and listened as Thomas closed Jessie’s door. Kieran’s nerves tingled as Thomas came down the stairs, slow and steady, and Kieran could barely remember why he’d thought it was a good idea to wait. By the time Thomas crossed the living room to lean against the doorframe on the opposite side of the room, his gaze never leaving Kieran’s face, Kieran could barely breathe for nerves.
“You shouldn’t have left so quickly last night,” Thomas said. It was almost a whisper, deep and dark with promise. A line straight out of every horrible porno Kieran had ever heard about.
Kieran nearly jumped out of his skin. He stared, wide-eyed, and every single instinct that had been telling him all along, no, no, stay, it’s totally cool was suddenly in complete rebellion.
“I… what?” he asked, his voice high-pitched and uncertain, and somehow that was enough to break the strange feeling in the room.
“Sorry, I… I meant that Connie wanted to give you a ride home.”
Kieran let out a long breath. “Oh. Okay. Just…” He ran a hand over his hair. “My mind went somewhere else when you said that, you know?”
“Not really,” admitted Thomas. Sweet innocence looked adorably ridiculous on him, thought Kieran, and he was glad Jessie-ville was in between them. “I know I startled you.”
Kieran laughed, not entirely at ease just yet. “Well, that and one of the worst pick-up lines from porno history ever, yeah.”
Thomas’s mouth fell open, and he groaned and leaned against the doorframe. “Oh, God. I didn’t mean it that way.”
“I know,” Kieran assured him. “It’s nice of Connie to want to drive me home, but… it’s okay. I don’t live that far away.”
Thomas frowned. “I thought you lived on the other side of town.”
Kieran was about to shake his head when he realized what Thomas meant. Your parents live on the other side of town. Which they did. Which Thomas obviously thought was where Kieran lived as well. Which in any other circumstance, as an unbonded omega – he would have.
“I mean,” said Kieran hastily, “I’m fine. I can take care of myself.”
“I never doubted it,” said Thomas.
Kieran felt the rush of warmth over his skin again as the words hung in the air between them for a long moment. He was still on edge, just a bit – every muscle in him might have been warm and comfortable, sure, but there was something that stayed wary and cautious all the same. As if it was waiting for Thomas to spring, even though Kieran absolutely believed that Thomas wouldn’t move until the door had shut between them.
“Thanks,” said Kieran. “Um. See you tomorrow?”
“Yeah,” said Thomas, and smiled for maybe the first time since Kieran had met him.
He looked… happy, when he smiled. Handsome, strong, and friendly.
He looked safe.
Oh, shit, thought Kieran, and his resolve began to slip as the strange pull that urged him closer to Thomas began to take over, as tense and uncertain as a rubber band drawing them together.
There is no way you are going to stay impartial about this man. If you’re smart, you’ll quit now before it’s too late.
And then Thomas took a step closer – one hand outstretched as if to reach for Kieran, to draw him in. Kieran could already feel the way the fingers would curl around the back of his neck, gentle but unassuming pressure, pulling him in. Tilting his face up, reaching down for a kiss….
“Kieran,” said Thomas, low and so unbelievably open, Kieran could hear the unmistakable sound of longing in them. “Do you….”
The words almost bubbled right out of him – but before Kieran could say a thing, he pushed back on the laundry room door and shut it behind him as quickly as he could.
It was freezing in the little laundry room. Kieran stood in the dark, felt the cold creep on his exposed hands and face, and felt warm enough that he wasn’t shivering at all.
“Oh, Thomas,” groaned Connie, on the other side of the door. “You let him go again?”

I love the mpreg trope and grab at any books written to the effect. In most cases, it's almost always a shifter paranormal and only a few are released where no shifting is require. for The Omega Nanny, the author specifically pointed out that this is not paranormal, instead it's set in an alternate universe. In this world, there are alpha male and females who can marry omega male or females. These omega are the bearers of the young. There are the betas who basically were second class citizens and just gained the right to marry another beta. This is a world with its own set of bigotry and ideals not quite that different or same as ours.

In this particular story, we have Thomas, a widowed alpha who lost his wife, an omega a week after bearing their child. For years he had been living with her ghost and his sister practically brought up his daughter. When the right for betas to marry passed, his sister took advantage of it so Thomas is left with no choice but to look for a nanny. The sister has a mind of her own and sets her eyes on omega Kieran.

Kieran catches Thomas' eye but because of he'd been living with his wife's ghost for so long, his feelings are laced with a whole lot of grief and guilt. Their yoyo relationship begins and that is really how their story evolves. In the end, they get their HEA.

This was a really entertaining read and I'm glad I read this for it now makes me curious about this whole universe that author Penelope Peters created. It's different yet familiar. Good read and I recommend this to mpreg lovers like me.

Penelope Peters has visited coffee shops in countries most people can’t pronounce. She’s had front-row seats to one coup, bleacher seats for another, and so far has only been evacuated once, okay, and that was totally not her fault. She routinely forgets to pack at least one item when she travels. (It’s usually her toothbrush.) Her first order of business when arriving anywhere is to locate the nearest coffee shop, where she drinks coffee with so much milk and sugar that it’s not really coffee at all.
Currently, Penelope frequents the coffee shops in Virginia, where she lives with her husband and two children, though that’s scheduled to change in the next year or so. The cat has only recently forgiven her for the evacuation. (The cat is convinced it was her fault.)

Posted by multitaskingmomma at 6:11 AM