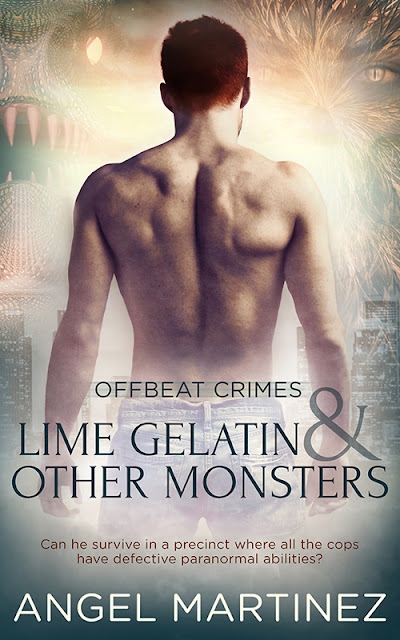 
Kyle Monroe’s encounter with a strange gelatinous creature in an alley leaves him scarred and forever changed, revealing odd abilities he wishes he didn’t have and earning him reassignment to a precinct where all the cops have defective paranormal abilities.
Just as he’s starting to adjust to his fellow misfit squad mates, Kyle’s new partner arrives. Tall, physically perfect, reserved, and claiming he has no broken psychic talents, Vikash Soren irritates Kyle in every way. But as much as he’d like to hate Vikash, Kyle finds himself oddly drawn to him, their non-abilities meshing in unexpected ways. If they can learn to work together, they might be able to stop the mysterious killer who has been leaving mutilated bodies along the banks of the Schuylkill.

Every region has them, but no police department talks about them—the weird crimes, the encounters with creatures out of nightmares. The 77th Precincts exist in certain cities to handle paranormal crime and containment, usually staffed with experienced officers exhibiting psychic abilities.

In Philadelphia, through an odd mix of budget issues and circumstance, the 77th is manned entirely by officers with bizarre or severely limited psychic talents. The firestarter who can’t get a spark when it’s humid. The vampire who can’t drink whole blood. These are the stories of the misfits, the outcasts from even the strangeness of the paranormal community. Call them freaks, but they’re police officers first, serving and protecting, even if their methods aren’t always normal procedure.

I love reading something where the geek in me rises to the fore and excludes all others.

Lime Gelatin & Other Monsters is one of those books where one has to have a huge background on the sci/fi fantasy genre. Not just of the reading kind, but the movie kind as well. This book's references to so many of these past works (which I gobbled up and still continue read btw). In fact, you have to get ready for this uses them for the fine detective work Kyle and Vikash have to do. It is through their geekiness that they solve the murders washing up by the river banks. It is these men's geekiness that gets tested and tapped so they can save themselves and live to tell another strange tale.

This is a strange story, the mystery of the murders is convoluted and hard to imagine. If I hadn't got the ready information in mind (the geek in me!) then I would consider this an elaborate test written up by a naughty author. The clues are not up front and frankly, I was lost. What made me persevere was how the two partners stumble into the answer.

Now, who are Kyle and Vikash? To put it simply, they are cops thrown together in a make-shift precinct created by the city because they displayed powers they could neither explain nor control. The precinct is manned by a mix-bag of misunderstood misfits who, as men and women without the strange powers, are actually great and effective cops.

How did this world come about? I have no idea. This is an alternate universe and the monsters (as that is what they call themselves) are popping up from everywhere. In the case of Kyle, it was fighting off a Lime Gelatin monster that made him what he is now. Vikash? Not so clear. Then again, no one knows what's going on either! In fact, that is the whole, bigger mystery. I especially love the reference to Ivan Reitman's Evolution at the very end (well, this is just my opinion and I may just be wrong, though I know I'm not...) and yes, I thought that was the perfect ending. That was so cool!

Thing is, she's got me hooked now and I want to know what's going to happen with the rest of the team.

Note: ARC provided for by author and publisher for an honest review. Thanks guys, this was such a blast to read :D

Kyle sat up straighter, shifting to see between the heads in front of him. Soren looked like a poster boy for the model police officer, tall and straight, uniform crisp and sharp. He stood at parade rest beside the lieutenant impassively surveying his new colleagues. A little knot of resentment lodged in Kyle’s stomach. At his own introduction to the Seventy-seventh, he’d been nervous and fidgety, freaked out by the collection of…freaks. How can he be so calm?
“Officer Soren transferred from the Harrisburg PD—”
“Don’t they have enough freaky shit of their own up there?” Wolf called out in his rasping growl.
“—since Harrisburg is in our jurisdiction,” she continued with a quelling glance. “He’ll start out partnered with Monroe.”
“What does he do, ma’am? That it’s safe to put him with Kirby, er, Kyle?” Shira Lourdes asked as she flicked nervous glances across the room at Kyle. An empty chair slid away from her and fell over. Her partner, Greg Santos, shook his head and righted the unfortunate piece of furniture.
“Officer Soren’s abilities are his business, which he may or may not choose to share if you ask. And don’t bully him about it either, any of you.” Lieutenant Dunfee swept the room again, pinning each of her officers with her needle-laser gaze like captive butterflies. “Monroe, my office after briefing. Info on your current case.”
She dismissed them, stalking from the room with thunderclouds in her eyes. Kyle found himself approaching the new guy and trying his best not to be awkward. Did he offer to shake hands? Was it safe? Would the guy flinch like so many people did at the sight of Kyle’s scarred hands? Soren was even taller up close, six-foot-three of lean inscrutability, his blue eyes startlingly bright against smoky bronze skin.
“Um, hi, I’m Kyle Monroe.” Kyle fidgeted when Soren didn’t offer his hand either. “You’re with me, I guess. I’ll show you our spot in the squad room.”
Soren followed him silently and Kyle was starting to wonder if he was like Krisk in the not-speaking department until he finally spoke in a smooth, soft baritone, making Kyle startle and miss a step. “Why do they call you Kirby?”
“You’d hear it sooner or later, I guess.” Kyle shrugged. “It’s this thing I do, absorbing other people’s talents temporarily. If they’re close to me. Or touch me. Like Kirby, the little pink dude in the video game.”
“Ah.”
Just that? Soren didn’t edge away, or change expression at all. Was he made of stone? “It’s a thing. Everyone here has a thing.”
After a few more steps, Soren asked, “Always?”
“What…oh, was I always like this? Who knows? I mean, maybe I’ve picked up stray thoughts or something, but no. It’s pretty recent. Knowing that I do this.”
Kyle took a wide arc around Vance as he entered the squad room, pointing to the double desk in the far corner, well removed from everyone else. “That’s ours. Coffee’s over there, but you might not want that coffee. Let me grab my file and we’ll go see the lieutenant.”
“So what’s your story, Soren?” Vance called across the squad room. “What flies your freak flag?”
“Yeah, what do you do?” Jeff Gatling stopped ’porting his banana from one corner of his desk to the other.
“I don’t really do anything,” Soren answered as he hefted the empty coffee pot. “Guess I’ll make fresh since I’m the new guy.”
He opened the top to remove the filter and every human voice in the squad room yelled out, “No!”
Most people would have startled, maybe dropped the carafe. Soren just blinked at the roomful of people gesturing wildly. He took the filter out and emptied it over the trashcan. “Why not?”
“You don’t want to do that.” Kyle stayed by his desk, a nice safe distance from the coffee station. “That’s Larry’s job.”
“Larry’s not keeping up then.”
The container of sweetener packets began to rattle. It shivered across the counter and leaped to a messy end, ceramic shards skittering across the floor. The desk that Krisk and Wolf shared rose from the floor several inches and slammed back down. Wolf fled with a squeaking yelp just before the desk flipped on its side.
Soren glanced toward Kyle. “Larry’s not a cop, is he?”
“He is…he was! A dead cop. Larry’s a ghost. He gets ticked if anyone else makes the coffee. Put the stuff back, please!”
“Larry?” Soren raised his voice but to all appearances remained completely unruffled. “I’m new here. I’m very sorry I invaded your jurisdiction. See? I’m putting the carafe back. Closing the top. Are we good, Larry?”
A breeze ruffled through a stack of papers, but no further mayhem ensued. The carafe slid from its pad on the coffeemaker and floated to the water cooler where Larry, who never manifested in a visible form, whistled tunelessly while he filled the carafe.
From his dim corner of the room, Carrington said in his dry, genteel way, “Welcome to the Island of Misfit Freaks.” 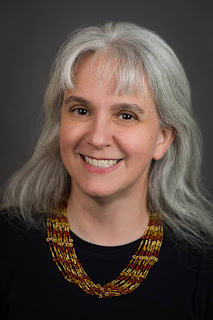 The unlikely black sheep of an ivory tower intellectual family, Angel Martinez has managed to make her way through life reasonably unscathed. Despite a wildly misspent youth, she snagged a degree in English Lit, married once and did it right the first time, gave birth to one amazing son, and realized at some point that she could get paid for writing.
Published since 2006, Angel's cynical heart cloaks a desperate romantic. You'll find drama and humor given equal weight in her writing and don't expect sad endings. Life is sad enough.
She currently lives in Delaware in a drinking town with a college problem and writes Science Fiction and Fantasy centered around gay heroes.