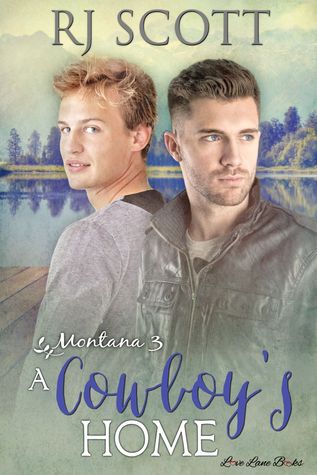 One burned and broken man finds his way home. Can he find peace in the arms of a man easy to love?

Justin made the ultimate sacrifice for his country, battling domestic terrorism, never the man he really was, using hate to avenge the death of his best friend. The friend he'd killed.

What he doesn’t count on is getting shot, and if he's going to die he wants it to be on Crooked Tree soil. Home.

Sam is as much a part of Crooked Tree as any of the families, and the offer to buy into the ranch is a dream come true. But falling for a hidden, secretive, injured man isn’t the way to keep his head in the game.

I'd been waiting for Justin's story, wanting to know the man he became after the horrifying events he'd suffered through. The wait ended with A Cowboy's Home, when Justin reappears and, just for a little bit time, gets to taste a bit of normalcy.

Justin comes home a broken man, stumbled upon by another broken man. They are both sensitive and needing a little bit of loving but didn't necessarily need the same thing as the other did.

In Sam's case, his nurturing nature compelled him to care for Justin and make sure he survives his injuries. The adventure he goes through to get things done is kind of dangerous but Sam saw the man behind the gun.

Justin never trusted in any one, not after what he had to go through as a teenager and as an assassin, but there was just something about Sam that made him forget all about his fears. This kind of reaction sort of reminded me of how a dangerous, stray dog gets to consider its chances with a human and takes a gamble. Justin took a gamble and he lost his heart.

This is an intriguing story, not an action-packed read that I expected it to be. Romance is at the forefront of this story and how both men focus on their developing relationship. Although not written to the style as the other Montana stories, this one is just as delightful a read.

I love the Montana series and I read how the men find themselves when they find their partners in life. With Justin, it was a more difficult road for him to travel, but he walked through the tightrope of fear, courage and life finally coming out in the end a hero in Sam's eyes.