Review: Don't Twunk With My Heart (Loving You #2) by Renae Kaye 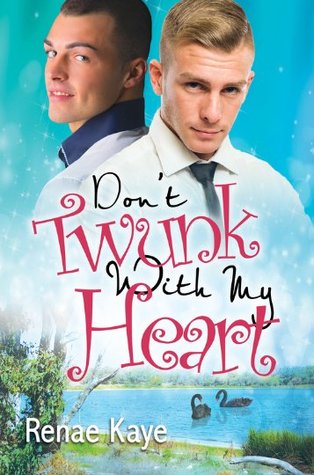 Kee Smith isn’t sure who he is anymore. He knows who he used to be—the ignored gay son who chose a blue-collar job just because no one expected it, the submissive bottom who enjoyed large, masculine jocks who put him in his place, the sleek, fashionable twink who partied all night. But after his ex-boyfriend hit Kee and called him names, Kee retired from the social scene.
Back after a year’s hiatus, Kee still doesn’t know where he fits. His friends say he’s a twunk—a twink who put on muscle and turned into a hunk—but Kee is searching for somewhere to belong. Instead of going back to his usual type, Kee hooks up with twink Tate Stevens—a fashion-industry professional who works the image hard. It proves to be the best decision he’s ever made, and not just because he’s starting to regain his sexual confidence.
With Tate, Kee can open up about his fears and confusion without ridicule. Tate has his own fears about putting on weight and getting old. It will take work to make a relationship of opposites succeed, but they begin to realize the compromises will be worth it if they can be together.


It's been a while, since I read a Renae Kaye book and actually, truly read a book for the sheer pleasure of it. Twunk. This is the word that drew me in and made me pick this story up. Whoever heard of the word TWUNK before they saw it on that title up there? If you say you did, humph, you're pulling my leg. Then, of course, there's twenk, twank, and twink. The last word, I think everybody knows what that is, but the others? Ha!

Now, I love a Kaye book because of one simple thing: light. I love a light read and for me, that's defined as nothing stressful, low angst, pure romance, a bit of comedy or something else, and the plot and character developments are easy to follow.

This is the second installment to the Loving You series where the black swans swim and twine heads. It first began with Loving Jay which was an over the top, mental and verbal diarrhea sorta book that tickled me pink and breathless with laughter. Twunk (I really do love this word I tell ya) is different. Should this have been an HP book, it would have been tagged as "darker."

Well, this is not dark, it still has all the elements I love from Ms Renae's works, it's just not about Jay, although Jay is there and can be a bit of a scene stealer. This is the story of a former twink, Kee, who gets back into the twinkdom scene and meets up with Tate.

Before I continue, Ms Renae, why is it I keep seeing Mitch Grassi in Tate? I mean, yes, now Mitch is bald, what I meant was when he was blond and had that awesome style of hair?

Tate is a cutie pie and so fantabulous, he is an image I refuse to wash from my brain. The way he manages Kee's family, beautiful. Mind you, guys, Tate's got his own problems, but with Kee beside him, they both manage their issues together. As a couple and as friends.

No, this is not Jay, but overall, this was one pleasure read to while away and highly recommend this for some bit of angst-free afternoon with a nice cup of...wait...scrap that.

Renae Kaye is a lover and hoarder of books who thinks libraries are devilish places because they make you give the books back. She consumed her first adult romance book at the tender age of thirteen and hasn’t stopped since. After years – and thousands of stories! – of not having book characters do what she wants, she decided she would write her own novel and found the characters still didn’t do what she wanted. She believes that the world is too complicated for her, so she loses herself in stories. The only thing that keeps her going are her children who are the delight of her life.

Renae lives in Perth, Western Australia. She is a survivor of being the youngest in a large family and believes that laughter (and a good book) can cure anything. Which is why it's a pity laughter is sometimes scarce on the ground.

Posted by multitaskingmomma at 10:20 PM