Review: The Case With The Feminine Touch (A Mark Julian Vampire P.I. Mystery #7) by L.G. Fabbo-Gonnella 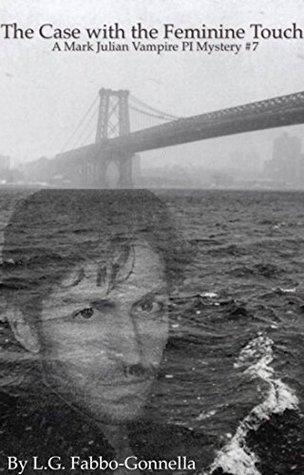 Werewolves assigned to New York City’s supernatural security forces are being snatched while on patrols with their new vampire partners. Worse, these vampires are unable to explain to anyone how the kidnappings occurred. Jean-Claude, the new chief executive of the supernatural council, is stuck in the middle of this rising tension. He ordered these “mixed” patrols, yet now it all seems to be going horribly wrong. Someone has to step in to stop the disappearances and find the missing werewolves. Unfortunately that someone cannot be Mark Julian since Jean-Claude fears having the vampire’s leader investigate the matter would only add to the werewolves’ fury. The circumstances are dire as a war threatens to erupt. Jaime, the shape-shifting sex demon wife of Jean Claude, decides to step in to solve the case. To do so she must reach out to her worst enemy for assistance. She understands this is a very delicate situation but is convinced a solution in this matter only needs just the right Feminine Touch.


One of my favorite reads is A Mark Julian Vampire Mystery, so yes, I have to make sure I read even if it's been months since I got this one. Note, before you go away thinking the rating is too low, stop and reconsider. This is a great story, written in the Fabbo-Gonnella style that I've come to actually enjoy.

Now, as with all the installments in this series, each one opens where the others left off. Not necessarily the next day or hour, more like, a continuation of the previous and if you haven't read the first books, you definitely need to pick them up. I won't bore you with what happened previous to this one, but here, front and center are the women in the life of Mark Julian. Not his women, more like the side characters who play important roles that keep the story as well as the angst going.

Here, we are getting werewolves missing, their vampire partners are ending up dead, too. It's a worrying time for all as the relationship between the vampires and weres are not at it's best. Jean-Claude, Jaime's husband, is in a precarious position as he was the one who attempted to repair the relations with the partnership. Of course, Jaime is on protective mode, no one should diss her husband. So, with all due respect to the alpha men, they better step aside because the woman is coming to the rescue. Her side-kick? Well, you need to read to know. Yes, I'm evil that way, but worry not, all ends well.

Now why the lower rating than the others?

Let me address the head-hopping. It is not an issue, so take it off the table. This is the author's style of writing and admittedly, in the beginning I had a bit of a problem getting used to it. But as I've now gone seven books, I'm used to the style and it works.

What lowered the rating, well at least for me, was the lack of editing. There were some problems that could have been fixed by another set of eyes. Typos were the main issue for me, and that lowered my rating drastically. Otherwise, if this had a better editing, I would rate this a 4.5 for the plot is intriguing and leads me to want more of this series. And that's it. I hope the following installments would read better, Can't wait for what happens next.

Posted by multitaskingmomma at 9:47 PM