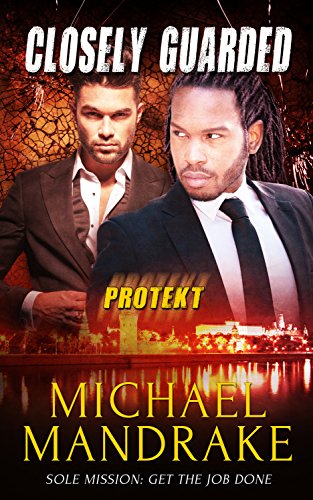 Book 2 in the PROTEKT series


Promises are meant to be broken sometimes.

Can Kimball complete the mission and keep his feelings for fellow agent Darien in check in the process?Darien Mosely, aka BA Pointe, is a former NYPD officer with a chip on his shoulder. He came to PROTEKT in search of a new identity and career after being accused of killing a man in cold blood. Darien’s keen perception is what has made him an asset, but his cockiness has often landed him in hot water.Kimball Emerson, aka Justice Masters, is an important figure in PROTEKT. Being a former army sergeant, he’s used to keeping secrets and being in danger on a regular basis. As one of the prime figures in the organization, he is counted on to be the finisher and, for the group’s latest task, he’s been called upon to find the leaders of a Russian mob. It should be easy enough with all his knowledge and special skills but not with his close friend Darien Mosely along for the ride.Kimball made a promise to his fiancé that he’d come back in one piece and not watch his partner’s ass, but he isn’t sure he’ll be able to keep the latter. Darien and Kimball have been best friends for five years and, at a Christmas party several months ago, they shared a kiss that left an indelible mark on their relationship.This latest mission calls for focus and calmer heads if they are to find the offenders who are bringing illegal drugs into Russia. The question is, how can they do it with mutual feelings and the threat of extreme danger looming over their heads?

Closely Guarded, is the second book to the action-thriller PROTEKT series. The men involved are hunky, well-trained in defense and offense, are gay (this is an M/M story folks), but they're also what many would consider, broken. Although I haven't read the first book, this one is a complete stand-alone.

In this installment, we have Darien Mosely and Kimball Emerson as the main men. Best friends, they are closer than most in their organization and one night, apparently it happened in the first book, not quite sure, but they kissed. Things wouldn't be so complicated if it were not for the fact that Kimball is engaged to be married to a different man. Now, many would consider this cheating, and for sure, I did as well. It wasn't until I gave this a chance did I reconsider and changed my opinion to Kimball having a hard habit he had difficulty breaking.

This is the real angst to this story. True, there is a whole lot of action going on hear, a lot of flirting on the side with different men involved, and there's the graphic violence that goes hand in hand with a thriller, but those were not the main friction. The real conflict is inside Kimball's heart and mind. You see, he's in love with Darien. He knows this without any doubt, but he is convinced he's in love with Mike, his fiance. How does he deal with it all? How does the author deal with a potential cheating expose and turn it into one of self-realization and romance?

I think Michael Mandrake managed to keep this reader on her toes. I was forever wanting to fast forward the story or just flip to the ending and find out who was the mole in their organization as well as discover how Kimball was to break it cruelly or gently from his fiance. Well, I held myself back and boy, there was a lot of foreshadowing regarding the mole, but how he finally faces reality, that was very well and kindly done. So peeps, take it off your mind. No, there's no cheating involved, there is an epiphany and before the habit breaks the man, the man broke it first.

Michael Mandrake pens complex characters who are already comfortable in their sexuality. Thorough these characters, he builds worlds not centered on erotica but rather the mainstream plots we might encounter in everyday life through personal experiences or the media.

Why I Write Outside of my Spectrum
Sharita Lira (a.k.a. Michael Mandrake)

I’ve wanted to write this blog for a while, and I finally decided why not? You see, other than my Facebook personality, along with the muses, I’m really a shy person. I hide behind the computer screen and most of the time my social media profiles don’t feature a personal picture. It’s not because I don’t think I’m beautiful. *smiles and twists black locks of hair around my fingers* it’s because my writing shows so many different sides of myself. I mean, why would I want to write about a woman in her forties with an evil day job? Ugh. Sometimes those would make for great stories, but in my mind they’re kinda BORING. No, I don’t want to go so far as saying I’m boring. Once I get to talking and, maybe with some help from the liquor variety, I’ll tell you my life story. Or maybe not. *laughs* But really, I’d rather tell you about my writing and the personas I take on when I sit down at the computer. Yep, besides the 3 muses, (No I haven’t started writing under Veronica yet so there is 3 main names) I have a variety of people I decided to be for every book.
For Michael Mandrake, and many of my characters, I take on the persona of a gay man. I learn things from reading other books, articles, and things on the internet. Yes, porn. SURPRISE I’m sad to say, I have no close gay male friends, but when it comes to sex, I rely on what I read as my guide. While I did the edits for Mocha Kisses, I was fortunate enough to have what I assume is a gay male editor. One thing I’ve hardly been questioned on is my sex scenes, but this time, he asked me about some of the things I wrote. I’m glad he did, because there were things I assumed to be true because of what I read or seen in porn. It’s good to have those things when you’re a cis-gendered, mostly het female and don’t have the resources readily available, but having someone to advise you during the editing process is very helpful.
As I’m rambling, I should get back to my post. I, as a cis het, female, want to write outside of what I know. I know customer service, worked in it fifteen years plus. I was a banker, I’m a mother of two kids, I’m married to a wonderful man, and I’m a black female who loves rock music. Even with all the things I claim to know, I will not go so far as to say I’m an expert. I still ask others for opinions or thoughts on things I include in my stories because I want to make an accurate portrayal. Despite all of this, I still might screw up on something because people will say, oh that’s not real or that doesn’t really happen, but that’s a topic for another day. Bottom line, I love writing outside of what I know to challenge myself and learn new things. I like to explore different worlds, cultures, etc, and I get hyped about putting that new knowledge into a book.
This kind of ties in with the two latest kerfuffles in the gay romance genre about writing GLBTQIA  and/or people of color. You can ask questions, do research, just like you could about a doctor, police officer, EMT, etc. These is a lot of important information about these professions and people of different races, religions, gender identities, sexualities, and ages are no different. However, I do add this. Write them as individuals first because no matter the differences they are still people.
To get back to my writing outside spectrum post, I’m saying don’t let any of this stop you from writing the story you want to write. In all seriousness, Michael Mandrake scares the shit out of me with his complicated plots. Serial killers, CSI’s, homicide detectives, double agents, and that’s only the tip of the iceberg. I’m intimidated at the lengths in which I have to research these things, but I wouldn’t have it any other way.
In my opinion, writing people shouldn’t be that much different. Do your due diligence and become that person you’re writing about. Do it with empathy and passion, and not because you feel you have to in order to sell books. Do it because you have a genuine interest in the person you’re including in your story because while you’re writing, you should put yourself in that character’s shoes and become that individual.
So why do I write outside again? To gain knowledge and become a different person. Besides, how many exciting stories are there about women in their forties unless they’re falling in love with a hot musician? *looks at the idea on my long list of WIPs*

Author Sharita Lira: In one word, crazy. Just crazy enough to have 3 4 different muses running around in her head, driving her to sheer exhaustion with new plot bunnies and complex characters.
In addition to being a computer geek and a metalhead, Sharita loves live music, reading, and perusing the net for sexy men to be her muses.  She’s also a founding member and contributor to the heavy metal ezine Fourteeng.net.

For more information, please visit http://www.thelitriad.com as well as her Facebook fanpage, The Literary Triad.

Posted by multitaskingmomma at 1:27 AM