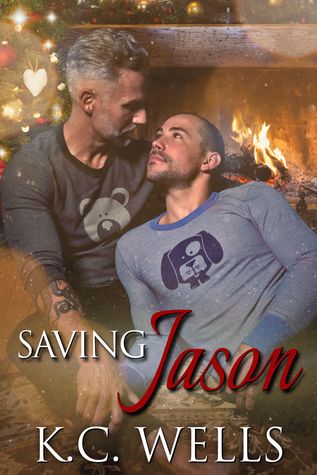 When David Merrow is given the task of finding a suitable soup kitchen so his company can improve their PR, he realizes he needs help. He turns to Jason Garton, the owner of the coffee house that David visits every morning. Funny how it took David so long to notice all the food and beverages Jason gives away to the homeless. Because until then, Jason had been almost invisible.
But the more David learns about him, the more intrigued he becomes. There’s something about the selfless, lonely older man that pulls David in, and what began as work becomes so much more.

I have a weakness for anything K.C. Wells and for May-December romances. Saving Jason is a great combination resulting to a fluffy, romantic read that sends tingles down the spine and made this reader smile silly. I mean, who can resist a silver fox? If you're saying you can, shush...me love me silver foxes.

Now, what is this story all about? Think Holidays and how it can be screwed up to the advantage of a business and how things can go right for everyone involved. David Merrow has a job to do and he needs the input of someone closely involved. He's been directed to locate a homeless shelter and use it to the advantage of the firm he works for as well as the homeless and the shelter. Now that he is more aware of his surroundings, David's eyes are finally opened and he sees the needy all around him...and Jason, the barista guy.

Jason Garton owns a coffee shop that David frequents daily. His history made him hyper aware of the homeless on the streets and so made it customary to provide some with breakfast when they come knocking in his cafe. When his frequent customer, David, opens up and talks to him about his deeds, he sees a friendship developing. Never in his wildest dreams had he imagined that this would be the holiday season to remember. As David and Jason's platonic relationship develops, there is no escaping it developing to a more romantic one and Jason is a little shaken and a lot stirred.

For those who are fans of the author, then you are very much aware that when she decides to write something cheesy, you are sure it will stick to your palate and leave you wanting for more. That's just how she does it. The romance oozes from every page here and is a perfect holiday read where everyone wanting one needs the oozing romance. We all need oozing romances this holiday season - just saying!


Posted by multitaskingmomma at 1:13 AM