When love's on the line, the brave jump in with both feet...

Small town cop Clint Rivera can’t catch a break. His ex of two weeks is suddenly getting married, his dogs tore up his furniture, he’s getting evicted, and he’s out of beer. When he decides to solve his alcohol shortage by going to his ex’s engagement party, Clint winds up too drunk to drive himself home. Enter gorgeous deputy mayor Hawk Black, the man who constantly shows up unexpectedly and sends Clint’s body and mind into a tailspin with nothing but his whiskey voice and blue eyes.
After months of patience, Hawk can finally seduce the man he’s been craving. Clint’s day might not have started out well, but Hawk’s going to make sure it ends with a bang, preferably in bed. He’ll show Clint some rewards are worth the risk.
With love on the line, Clint will need to decide if he can open his heart, tear down his shields, and jump in with both feet.

This is a 2nd edition without substantive changes from the 1st edition.

Review by: multitaskinmomma
My Rating: 4 of 4 Stars
(Based on Short & Light Read Category)

Have you ever had that experience where everywhere you turned you just seem to run smack into a wall? Figuratively and literally? Trouble coming in threes increase to four, five six? Well, I've had those but wow, Clint has me beat!

First, he finds out his boyfriend was really a liar and a cheat and all around closeted ***hole so he breaks up.

Second, his now ex-boyfriend sends him a stupid invitation. To his wedding! Seriously?

Third, he gets home and finds out that a) his baby dogs, you know, those he adopted for their sweetie-pie eyes? They tore up his couch. Okay, that is three, right?

But no! It goes on to fourth: he finds out he is getting evicted for some reason or other.

What's the fifth? Well, he gets really drunk at the reception, but get this! He gains a sixth. And I stop counting from there because, well, spoilers. hehehheee

From the sidelines, Deputy Mayor Hawk Black watches Clint go gago (masculine equivalent to gaga) through his stress and frustration. He thinks that now is his chance to finally get his hands on this man he wanted from afar and had befriended and got to know a little bit through some coffee.

This was a super fun read even if it cost Clint a lot of angst. Hawk is a enigma but soon becomes a clearer character and when the final pages came through? I just smiled goofy and felt so good. 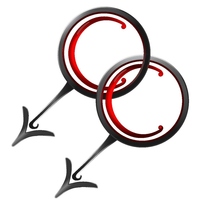