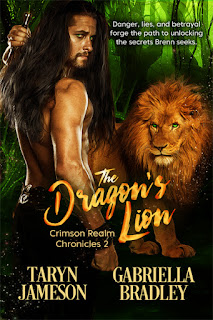 Danger, lies, and betrayal forge the path to unlocking the secrets Brenn seeks.
The rescue of Brenn’s pride sets off an angry tirade from Cewrick that results in curses that almost cripple the Crimson Realm and all of Ierilia.
With the help of Ciara, Brenn leads his crew through the bowels of the planet and the forbidden forest to unlock the secret of defeating Cewrick. But will his defeat end the reign of terror on their world?


Brenn paced back and forth. How could he possibly rest after the events of the night? What had started out as a night of victory and discovery had quickly turned into one of disaster and havoc. Cewrick had vented his rage at losing his captives across the whole planet. Brenn’s family and pride were safe, but at what cost? Even though Ciara had dispelled the wind funnels and their destruction, there was nothing she could do about the stone curse. So many innocents had turned to statues in a matter of minutes. If Cewrick unleashed the renegade Toubosians on the villages west of the Inar Ridge, they would have no defense against the ships and could suffer the same fate as Xynnar.

He stopped his pacing on the verandah of his rooms. Gazing over the courtyard, he caught a glimpse of his beautiful dragon as she slept in his orchard beneath the umbrella of his giant wraggia trees, their branches heavy and laden with ripe, lush fruit. He frowned, his brow creasing with worry for her. The night had taken its toll on Ciara. After flying to every corner of their planet to stop the black wind funnels, she had returned to Brenn’s estate and tried every possible spell she could muster to halt the stone curse, but her magick had weakened. He could feel how weary she was, how helpless she felt against Cewrick. She rested now, too exhausted to fight the sleep that overtook her.

He hated that she fought alone. Dissipating the wind funnels had exposed her to more and more people. He knew word would travel to Cewrick about the jewel dragon protecting the Ierilians and he would realize it was Ciara, the sorceress that had escaped his clutches. He would know she was no longer bound to the Clyss, and the sorcerer would spare no effort in his attempts to find her so he could bespell her again and try to capture her for her much-coveted soul shard.

After the suns came up, the stone curse had stopped, but Brenn was sure Cewrick was brewing up more plans of revenge.

Also in the series:

Posted by multitaskingmomma at 6:49 PM